Posted on July 29, 2012 by heritagetoursnorthwales 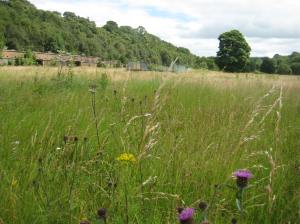 A fascinating secret world is hidden in the village of Rhydymwyn near Mold. During World War II an area was developed as a base for storing significant amounts of mustard gas shells. This was an ideal site as it was well hidden in a relatively narrow concealed valley and tunnels could also be created to provide complete protection from enemy bombs.

During the production of chemical weapons scientists were not allowed to carry paper for security reasons. On the walls of some of the remaining buildings you can still see their notes and calculations.  In addition work was carried out into methods to develop the atomic bomb. Although about 2000 people worked at the site, even family members didn’t know what went on there.

The Valley Works site is now owned by DEFRA (Department of Environment, Food and Rural Affairs) and over a 10 year period the site was reclaimed with seeded top soil imported and some of the buildings demolished. In 2004 the site became an nature reserve and NEWWildlife (North East Wales Wildlife Trust) now manages the Rhydymwyn Valley Nature Reserve. Other organisations are also based here – the Rhydymywn Valley History Society and Friends of Rhydymwyn Valley.

I took the opportunity to visit the site this wee 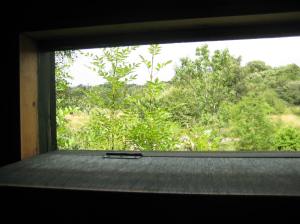 kend and found it was buzzing with wildlife. There are over 84 species of birds recorded on the site. We saw buzzards circling above the site, as well as smaller birds such as green finch. In the wetland area heron, moorhens, mallards and even great crested grebes can be spotted. It is an excellent breeding ground for grass snakes, slow worms and it was relatively easy to spot common lizards lurking in the undergrowth.

An amazing variety of eight different types of bats also live on the site. The lesser horse-shoe bats roost in some of the old World War II buildings on the site. However you’re  unlikely to see them, as the site is only open during the day – and visitors other than members have to be accompanied by staff. 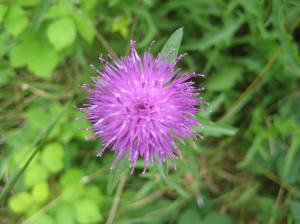 There’s a Woodland trail which can be followed through the site, which has a range of conifers such as spuce, as well as many native deciduous species. An orchard has recently been planted, which includes local varieties, such as the Denbigh Plum. It’s just a shame you can’t eat anything on the site – including the ripe raspberries I saw – due to possible contamination, even after all these years!

There’s a wide variety of fauna in the grassland area, such as the knapweed illustrated here, and I spotted harebells, varieties of thistles and even the one of the orchids which grow here. The wetland area is home to other flora species.

A new willow bed has also been planted – which will be used for craft activities and making willow structures.  Events are held throughout the year, so it’s well worth making a visit to this intriguing site.

Posted on April 2, 2012 by heritagetoursnorthwales

There is an opportunity to experience the ‘Royalty and Rogues’ tour in Ruthin on Easter Monday 9th April. Listen to stories of rogues who were inmates at the Old Gaol – including the infamous John Jones ‘Coch Bach y Bala’ who escaped and was on the run for five days. Hear the story of the last execution at the Gaol.  Also find out about another rogue in Ruthin – who was expelled from the House of Commons for his corrupt dealings. The tour starts at 11am from Ruthin Craft Centre Tourist Information Point. Adults £5 Children £2.50 No booking required. Why not make a day of it and also look round the Gaol?

Ruthin – a real gem of a place to visit

Posted on February 2, 2012 by heritagetoursnorthwales

It’s all been happening for Ruthin during the last few days.

First of all the BBC magazine has put Ruthin on the map – an alternative map for 2012 visitors!  As this is a big year for tourism in the UK  (with the Olympics and the Queen’s Diamond Jubilee), the magazine asked people born outside the country to identify lovely places to visit which are a bit more unusual – and off the beaten track. Ruthin was highlighted – with tourists from the United States and Australia having amazing experiences during their visits to the town.

This publicity came just after Ruthin Castle Hotel announced a £1.5m upgrade of this historic building. By June this year, the hotel will be turned into a 60 bedroom four-star hotel with a spa and wellness centre.

The original motte and bailey castle was built in 1277 for Edward 1 of England.  Much of the stonework was removed after the siege in the 17th century Civil War. However the splendid ruins of the old castle can still be seen in the grounds – including the legendary whipping and drowning pits, as well as the dungeons. During the 19th century when the imposing red sandstone castle was built, the owners, the Cornwallis West family, hosted many high society figures-including Bertie, Prince of Wales.

Then on Tuesday there was the re-opening of The Castle Hotel.

Wetherspoon has spent over £2m on the refurbishment of this historic building to create a 17 bedroom hotel. Known as ‘The Castle Hotel’ for the last 100 years, (which can cause a bit of confusion for visitors as there are two hotels in Ruthin with ‘castle’ in their name!) it was a coaching inn during the 18th century – when it was known as the White Lion.

A walk inside the building reveals many nooks and crannies where you can eat and drink. There are numerous photographs and information boards displaying fascinating facts about the history of the town and other snippets of interest.

The  coat of arms seen in the photograph are those of Owain Glyndwr, the last native Welshman to hold the title of the Prince of Wales.  He attacked and burnt Ruthin on 18th September 1400-the start of the last War of Independence.

Bangor on Dee – discover the beauty of basket-making

Posted on January 17, 2012 by heritagetoursnorthwales

I was in the Bangor on Dee area today so I decided to call on Johnson & Son – a basketware family business spanning five generations. It’s always a delight to visit the village and you always get a warm welcome at Johnson & Son with its friendly staff.  The business is also a Tourist Information Point that not only has a wealth of information, but also has displays about the local area and pictures showing the basket-making business over the years.

All sorts of baskets are made. Dog baskets, log baskets, needlework baskets, hot-air balloon baskets and more unusual commissions such as basketware bicycles. Ken took a break from making an enormous dog basket to show me busby/bearskin frames for headwear -part of the ceremonial uniform for soldiers.

Demonstrations of the fascinating art of basket-making are given to groups and I can arrange this. This can be combined with visits to other nearby attractions – such as to a monk that comes to life!

Rhuddlan – a town steeped in history

Posted on January 15, 2012 by heritagetoursnorthwales

Today was a beautiful day – with frost covering the ground first thing, a cloudless blue sky and brilliant sunshine.  A perfect day to drive down the Vale of Clwyd to visit Rhuddlan. I love the view approaching the small town of Rhuddlan across the River Clwyd. The imposing castle perched above the banks of the river is a magnificent sight.

Rhuddlan Castle – one of the ‘Iron Ring’ of castles built by King Edward 1 to control the Welsh – never fails to impress.

On the other side of the bridge entering Rhuddlan is the beautiful and ancient St Mary’s Church – a double-nave church, typical of the Vale of Clwyd.

A walk round the town reveals many fascinating things. There’s the site of the reputed Parliament Building, where the Statute of Rhuddlan was created in 1284 introducing English common law to Wales.  Then there’s a rather hidden mound which is the remains of the earlier castle – known as Twthill. Rhuddlan is certainly well worth a visit.